I finished the first mannequin of my Malifaux crew yesterday.

As with the performers, I tried to stick fairly closely to the color-scheme on the box, but I weren't able to mix a purple/pink that was as vibrant as the artwork. I’ve ordered a Vallejo “pink” (along with a bunch of other stuff), but I didn’t feel like waiting for it to arrive, so the figure ended up with a dress and leggings in a much more muted shade of purple.

Combined with the grayish “skin”, it looks slightly faded-out besides the much more colorful performers, but maybe that isn’t such a bad thing. It is, after all, supposed to be an assistant. 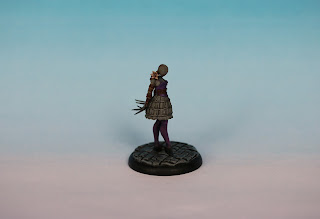 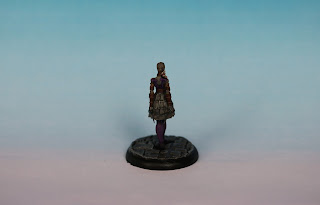 If you look at the date of my last post, you might be led to believe that it took me about ten days to paint this figure, which isn’t the case. For all its tiny details, it was actually fairly easy to paint and has a simple, but attractive, three color paint-scheme.

For some reason, it seems to have flown under the radar; there aren’t many reviews out there at any rate. I’ve been aware of it for a while, but until recently it was only available on IOS (I’m an Android person myself), but I finally got started on the campaign last week, and immediately lost 20 hours to it.

It’s basically a near one-to-one adaptation of the board game to mobile devices and it’s actually very good. If you like BFG, you should like this as well, even if you will spend a bit too much time fighting the interface in addition to the enemy. It usually works though; once you learn what all the buttons are for.

The main part of the game is a campaign where you try to defend a star system against the advance of (surprise, surprise) Hive Fleet Leviathan. It’s very tense, and you’ll constantly be struggling to make your (painfully sparse) fleets be at the right place at the right time. I’ve only just gotten my first heavy cruiser, so I’m probably not even close the end, but it already feels like an epic adventure. 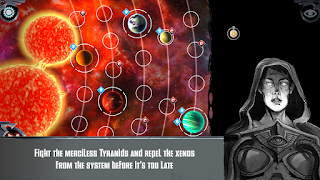 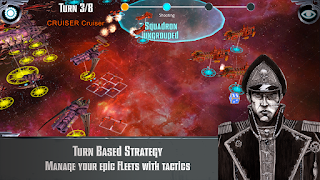 If I do have a criticism, it’s that you’ll spend all your time fighting Tyranids (though you can play skirmishes against imperial forces). The ‘Nids have a very specific playstyle, which in turn means that you’ll have to adopt an equally specific style to combat them (torpedoes… lots of torpedoes). It would have been nice to see some Chaos or Ork raiders to spice things up a bit. Maybe even some Imperial rebels (‘Stealer cult, anyone?), which wouldn’t have required creating new assets for the game.

Fighting all those Tyranid drones has made me reevaluate the value Cobra Destroyers however. Sure, those puny guns are utterly useless, but the ability to fire off a torpedo salvo (almost) wherever I want to is simply invaluable against escort-heavy fleets.