The title isn’t about racial tensions in modern America, but rather the (probably slightly less important) issue of choosing an undercoat.

I may have mentioned this before, but I always used to undercoat my figures in black (it was all the rage in the late 90’s), and so it was natural for me to continue to do so when I got back in to painting.

However, after painting a few figures that arrived from eBay pre-undercoated in white, I’ve slowly come to realize that it is a better fit. It’s generally faster for me and it mitigates my penchant for painting fairly dark and muddy colors.

It’s probably not the best demonstration, since they aren't totally alike but here’s two Skaven I finished recently: 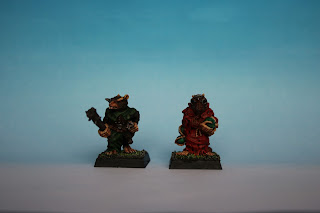 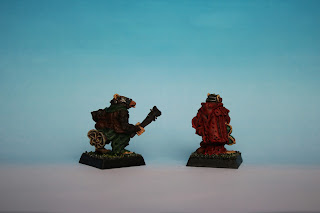 I’ve also tried a grey undercoat, but as I haven’t really been able to make the most of it, so I’ll stick with white for my old Citadel.

Croaker
Posted by Croaker at 19:57