I’ve been having the family over for Christmas and therefor haven’t had much time to myself, which again means that I don’t have any news on the Oldhammer front. I did, however, find time to sit down with my brothers and play through the campaign of Fantasy Flight Games’ (FFG) new card game, Warhammer Quest – The Adventure Card Game.

The hunt for the ultimate “dungeon crawler” is sort of an obsession for many board-gamers. I believe the general consensus is that there’s no such thing – each game has some kind of imperfection that keeps it from greatness, whether it’s unclear rules, too-simple gameplay or simply being overly fiddly. My personal opinion is that Advanced Heroquest is the dungeon crawler that’s come closest, but many would probably name Warhammer Quest as their all-time favorite. That’s why, when FFG announced they were doing a card-game version of it, many were cautiously excited. It’s not really what they were hoping for, but FFG does maker very good games and a card-game version of an old favorite is better than nothing. So, when my brother brought it over for Christmas we immediately decided that we had to finish the included campaign before the end of the holidays.

Well, we did finish the campaign, so I thought I’d write a bit about my impressions.

I won’t waste time describing the rules. They can be found on FFG’s site it you are interested. The game itself is relatively simple anyway – most of the intricacy comes from the interaction between different cards.

FFG has done a very good job of differentiating the characters and enemies. The various kinds of enemy feel very thematically appropriate; goblins are weak, but dangerous in numbers, Skaven are unpredictably dangerous (especially jezzail and warlocks) and orks are tough and scary. You will fear the nastier kinds of critter and you might actually come to loathe a certain cunning old ork (which is nicely out of character for “Newhammer”) who just won’t stay still when you try to wack him over the head.

The heroes also feel pleasantly unique. My only gripe is that there’s only four of them available in the base game so you’ll quickly run out of new combinations – especially if you play with more than two people at a time. I’m particularly impressed by the feel of progression you get from the game. At the end of the campaign we were accomplishing feats we couldn’t even dream of in the beginning – all with very little rules-overhead, which is especially remarkable. You just add an effect here, switch a card there and boom! Suddenly you’re a bad-ass.
Art-wise the game uses a lot of FFG’s stock Warhammer art, which aligns closely with the later editions of Warhammer. That means everything is as over-designed as you’d expect. See this big ork: 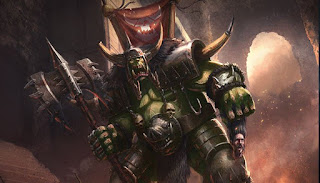 You just know he’s tough, because his head is the size of a walnut. And the elf, well she’s a wood-elf, so obviously her clothes are partially made of twigs! (however that’s supposed to work), and so on and so forth...

Actually, the art is undeniably gorgeous (and, thankfully, there isn’t a “sigmarine” in sight), so I find myself willing to suspend disbelief for a while. I don’t know – maybe it’s just because it’s drawings and not miniatures, but the cartoonisism (not a real word, I know) doesn’t bother me as much. Besides, FFG does know when to dial it back, as exemplified by the wonderfully moody location cards. 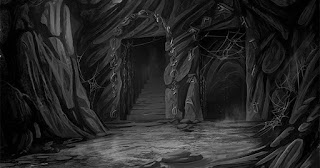 All in all, it’s a very, very good game. Each quest takes, at most, an hour to play through (including set-up), which is nice and fast, but when you combine them into a campaign, it still feels appropriately epic.

It’s not the “perfect” dungeon crawler and I suspect that, as a card game, it won’t ever be, but it does scratch the same itch, and at a low price, with easy rules and a low play-time it definitely has a place in my collection – as will any expansions that may be released in the future (you hear me FFG? Bring out the expansions!).