As a part of my effort to paint a full set of figures for Advanced Heroquest I’ll eventually have to paint a ton of Skaven, which is actually slightly scary for me. You see, I once tried, and badly failed, to paint a Beastman army. I simply couldn’t motivate myself to paint all that brown (this was back when I thought that all Beastmen had to be brown-furred, goat-headed bodybuilders).

There’s a little more leeway with Skaven (for one thing they tend to wear a more clothes) but there’s still no way I’m getting out of painting lots and lots of fur, so I have to stay on track, and my usual four-hours-per-miniature routine simply won’t cut it.

So, to maximize my chances of actually finishing all those rats, I tried a very speedy style for my first three clan-rats. Here’s how they turned out: 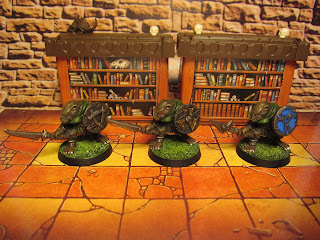 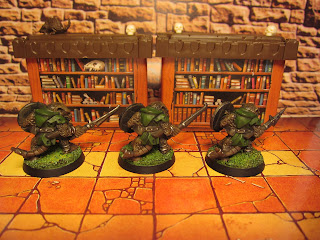 I’m really very pleased with them. Though the paint-job is quite basic, it took almost no time at all and I actually think that the overall effect is rather striking.

Basically, I dry-brushed the models with three layers of increasingly lighter brown. I only applied the last layer, which was almost buff, to the skin-parts (hands, feet and face) and, lightly, to the fur.

I then treated the skin and fur with different washes (red-ish for the skin, dark brown for the fur) which gave a nice variation to all the brown – though my camera sadly didn’t pick it out (probably because I’m using artificial lighting, but It’s cold and rainy outside, so that’s just how it’s going to be).

After the washes had dried, I painted the metal and clothes. Both got a base color and a layer of wash to bring out the detail, but no highlights. I figured that if there’s anything I can get away with not highlighting, it’s Skaven, and it saves me a lot of time on each figure.

Lastly I painted the claws, teeth, eyes and shields, and did a tiny bit of touch-up on some of the leather.

You’ll also notice that I’ve actually done the bases this time. I figured that it was about time to pick a style, but as I’d like to use some of my figures for both dungeoneering and field-battles, I didn’t want all-green bases. In the end, I decided to try Orlygg’s basing guide which seems to give a nice all-round effect. You’ll probably also notice that I didn’t quite manage to replicate the style. It might simply be because of my lack of experience or it might be because I’m not using inks. A proper set of inks are high on my to-buy list anyway, so this may be a good time to get them. Vallejo does a nice set.

I really enjoyed painting these three little critters – and I wasn’t expecting to, so I’ll call it a success.

Croaker
Posted by Croaker at 18:54