I’m still being kept rather busy with the care and feeding of the tiny human being my wife and I brought back from the hospital last week (the feeding part mostly being done by the mother of cause), so the amount of painting I’ve been doing this last week is exactly… nil. It’s not like I don’t have any spare time, but there’s a lot of more important stuff that needs doing first (including catching up on some sleep).

However, I have managed to engage in at least one hobby-related activity; assembling my paint-rack, seen against the wall here: 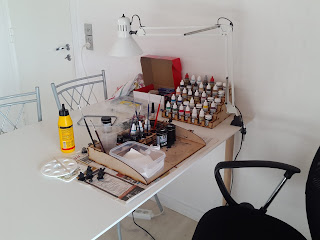 It’s noteworthy that the assembly took me three days from start to finish, which should give you an impression of the amount of truly free time I have right now.

Earlier, I just kept whatever paints I couldn’t fit on the painting-station in a box, but the rack does make it a lot easier to get an overview of my growing selection.

It’s actually kind of funny to see just how far I’ve gotten from my very modest starting point just six months ago – both gear and technique-wise. The most groundbreaking (for me) revelation has got the be the wet-palette, closely followed by the idea of Blu-Tacking the minis on to something to hold on to while I paint them.