Getting sidetracked (in space!)

I have a batch of miniatures mere hours away from completion, though to be fair this could translate into several days due to the current demands on my time. What bugs me is that they’ve been in this state for about a week.
Why? Because Battlefleet Gothic: Armada came out, that’s why.

For the uninitiated, it’s a pc-reimplementation of the 1999 Battlefleet Gothic board game (BFG from now on). This one: 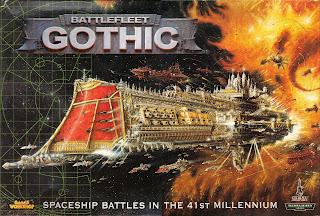 I’ve always had a soft spot for BFG. It’s not because it’s the most lavish product ever produced by GW (with only eight actual models in the base game it might even be accused of outright stingyness), but everything inside is just soooo lovely. From the components: 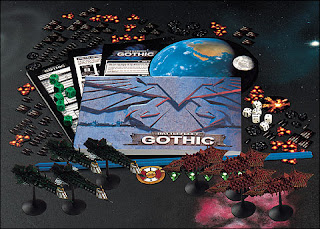 A (sadly) low-rez photo of the box contents
To the rule book: 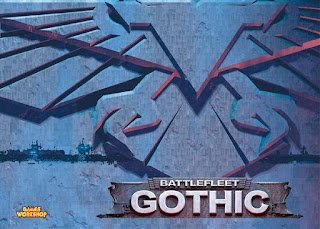 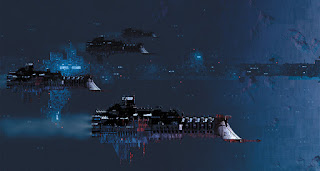 To the wonderfully moody art:

And the (surprisingly) interesting background and short stories inside the book.

I don’t know why, but everyone involved in the project just seemed to be doing some of their best work. It’s truly a labor of love and, unsurprisingly, it was quickly discontinued by GW.

I never got a copy of it myself when it was in print, which is one of my greatest hobby-related regrets, but I played a friend’s game a bunch, and I really, really liked it.

The best way to describe why I love BFG, is probably to tell a short anecdote from one of my first games.

First a bit of rules; You see, ships in BFG have a certain amount of inertia, which means that they have to move each round and can’t turn until they’ve moved a certain distance, unless you give them a “burn Retros” special order, which requires making a leadership test.

These things became very important when I, in my excitement to “get up close and personal” with my opponent’s Chaos ships, I flew my entire fleet too close to the edge of the table. Ships that leave the table count as having disengaged and can’t take further part in the battle, which meant that suddenly my entire fleet was scrambling to issue “Burn Retros” orders. Some made it, and some didn’t, and in the meantime, my opponent had moved behind my remaining ships (where I couldn’t return fire) and promptly crippled half my remaining fleet.

How awesome is that!?
I made a huge tactical mistake and was promptly punished for it, but the episode taught me to always think movement at least a turn ahead.

Anyway, even amidst rumors of a new edition, I’ve been jonesing to play a game of space combat in the Warhammer universe for years, and now I finally can!

BFG: Armada is a fairly faithful interpretation of the board game. I could certainly point out some faults (mostly on the technical side) if I was in a mood for nitpicking, but I won’t, because it really would be nitpicking.

Still have to finish painting those models though…