Aaaaaand we’re back. After barely escaping their first foray into the underworld (mostly due to some bad decisions, caused by lack of experience), my AHQ heroes are finally ready to brave the darkness once again.

This time, instead of playing an entire expedition and doing a long write-up when I’m finished (a process that might take weeks, depending on circumstances and the whims of the tiny human being that’s now in charge of my schedule), I’ll post updates as I play along.

But before the party could continue their quest, they had to return to town to rest and restock. You can see the relevant page of the rulebook here: 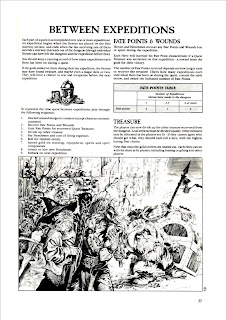 The heroes recovered all wounds and fate points but didn’t gain any more as they hadn’t completed the quest yet. You’ll notice that they’ve already missed the chance to gain two fate points in one go, but as long as they get the job done in no more than three expeditions, they at least get one.

After totaling up their treasure, they had 535 gold crowns (GC) combined, which I didn’t bother dividing up yet. As they didn’t have any henchmen, living expenses ran up at 80 GC, leaving them with 455 to spend.

I then rolled a “19” on the random events table (Risk Pay) – one of the few results that didn’t actively hurt, since, once again, there are no henchmen to demand the extra salary. 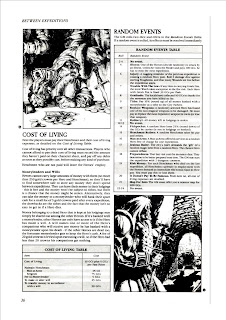 Which meant that I’d finally gotten to the good part, i.e. buying stuff.

Croaker seems to be doing all right. I might buy a set of plate armor for him eventually, but not now. Allum, on the other hand, got a chainmail. This makes him damn near immobile in combat, with an effective movement of two, but he could really use the extra protection. I may have to increase his speed at some point, but I didn’t feel like shelling out the 200 GC right now.

I couldn’t find the rules about selling stuff (I’m almost certain I’ve seen something about it somewhere…), so he’s keeping the leather armor in his backpack for now. Don’t know if it’s technically legal, but who cares.

Finally, Allum got two flasks of Greek Fire, which can be used to clear away a variety of obstacles, but are also illegal, so I just hope he doesn’t get caught by the city watch! 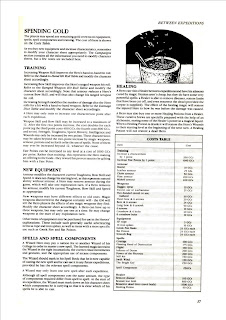 Last up was Ellandiel. He’d given me the most headaches during the last expedition by running out of arrows and only then realizing that he’d forgotten to bring a back-up weapon (what are you looking at? It was obviously a tiny plastic elf, and not I, who made such a dumb mistake!), so I bought him a plentiful supply of arrows (12) and a spear. A sword would give him an extra damage die, but I really don’t want him (and his rubbish statline) up front, where he can get hurt, and a spear allows him to attack diagonally, which provides him with a bit more protection since most monsters can’t then hit back.

After all this shopping, I was left with 175 GC, which I distributed amongst the heroes. Their updated character-sheets look like this: 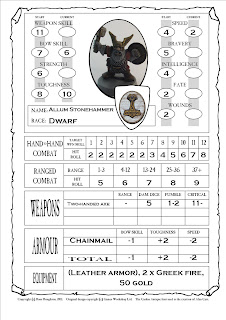 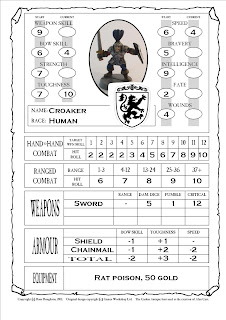 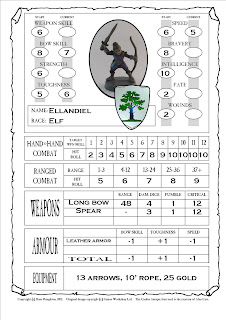 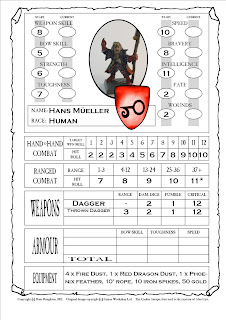 And now it’s back to the dungeon (right after I go to a wedding this weekend that is…).