It’s been another couple of slow weeks. My speed of painting is as glacial as ever (and that may even be doing actual glaciers a disservice, what with all the melting of the poles that’s going on), and to make matters worse, I’m visiting the in-laws on the other side of the country this week.

So instead of showing some actually finished figures, here’s a picture of what I’m currently working on: 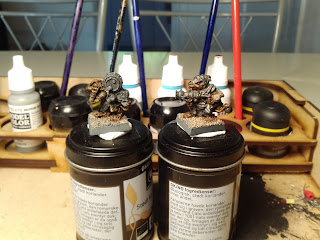 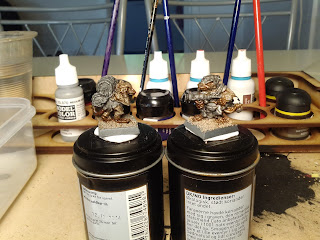 As you can see, they have been undercoated grey, which is something I’m trying out. You see, previously I always used to undercoat in black, but lately I’ve had some good experiences painting a couple of skaven that had arrived from eBay pre-undercoated in white. This made me want to try switching to white myself, but my younger brother suggested that I used grey instead, to get the best of both worlds.

Even though my brother is very much biased against undercoating in white (probably a reaction to growing up during GW’s “red period”), he’s also a much better painter than I am, so I figured I’d give it a shot.

So far it seems to be working well. I gave the fur a layer of brown ink and a two-step drybrush to highlight it. Looks (IMO).

The rest got a layer of Army Painter “dark ink” to bring out the detail (I could probably have skipped this step, but I wanted to see what I was doing), and that’s as much as I’ve had time to do.

I’ll post pictures when they are done, but if the rest is as quick to do as the fur, I’ll be very pleased.

Croaker
Posted by Croaker at 16:22