I’m still playing Armada whenever I get half an hour to myself, but the more I play, the more I long to try the real thing. So, I did something stupid. Something you should never, ever do.

I bought the base game on eBay with nothing more to go on than a photo of the front cover and a description that it was “complete”. 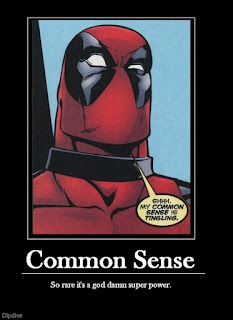 
However, it was relatively cheap (a nice version of BFG can get expensive) and from a reputable seller, so I figured it was worth a shot (as much as I thought about it beforehand anyway).

Well, after paying for shipping, import tax from the US and a “handling fee” (a.k.a. the 15 pound arbitrary “fuck you” toll the Danish Customs levy on each package they check*) it wasn’t all that cheap after all, so it was with some trepidation that I opened the box when it finally arrived.

Inside I found this: 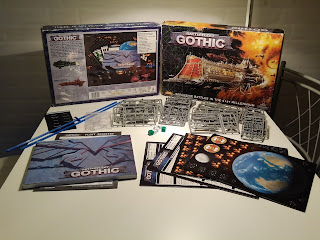 The very sharp-eyed amongst you may have noticed that it isn’t, in fact, complete. It’s missing a few normal dice (no biggie), a flight-stand (should be fixable) and four order-dice (a bigger problem – these are not cheap).

Other than that, it’s in excellent condition, with the counter-sheets unpunished and most of the ships still on sprues. This actually presents me with a bit of a dilemma, as I could potentially make some money by selling them and buying pre-assembled ships instead. I’ll think about it, but I’m just not sure it’s worth the hassle.

Not too bad, but it’s still not actually “complete”, which should piss me off, except that the box also contained these: 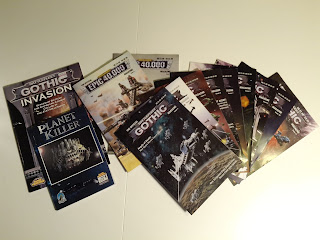 I really don’t know what the Epic magazines were doing there (and I have very little interest in Epic stuff from between the time of Adeptus Titanicus and Epic: Armageddon anyway), but the rest is pretty sweet.

All in all a very good haul. The next step will be to buy a small fleet for each of the four main factions (and maybe Tyranids, which are cool. Tau, Dark Eldar and Necrons can go jump the sea for all that I care).

This will probably take some time since everything connected to BFG seems to be massively overpriced on eBay (probably because of the game’s relatively limited print run). To make matters worse, it seems that BFG was more popular in the US and Australia than in the UK (at least that’s where a lot of sellers ship from) – which brings me back to my rant on the cost of importing stuff from outside the EU. Oh well.

Croaker
* I’m sorry to get all political, and it’s not really my business, but WTF UK!? If I end up having to pay import taxes on all my oldhammer goodies in a few years, we are going to have words.
Posted by Croaker at 10:11