I finished my Skaven jezzail team yesterday (yay!) and instead of just dropping a picture of the finished models, I thought I’d do a quick step-by-step. 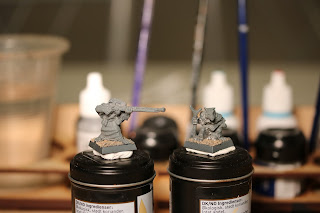 I’m undercoating in grey. It’s a new thing I’m trying, and so far I’m fairly pleased with the results. Nothing controversial here. 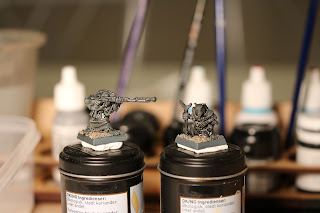 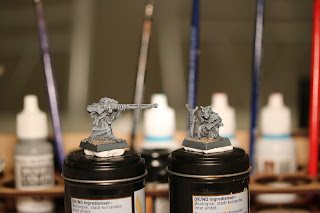 Afterwards I wash the models with Army Painter Dark Wash and then apply a very rough drybrush in white to bring out the detail and aid with shading. 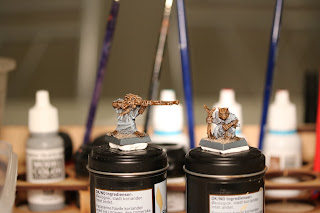 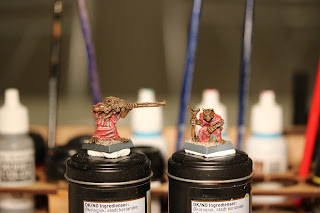 I then apply a coat of ink to the fur, wood, leather, warpstone bullets (at least, that’s what I imagine he’s got in the sack) and clothes as a base coat. I’ve tried this with the fur before, and I think it works, but as you can see, the red ink doesn’t cover very well – especially on the raised areas (I’d sort of hoped that the white drybrush would help, but it obviously didn’t). 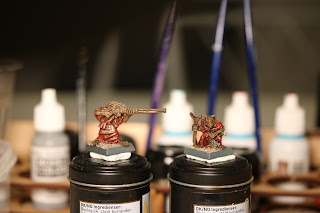 To salvage things, I gave the red areas a couple of layers of P3 Brown Ink. It worked out fairly well, but in the future I think I’ll just give the red clothes a proper base coat. 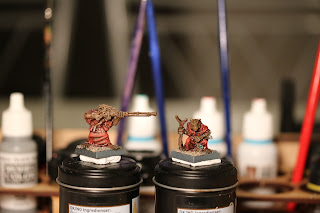 I then drybrushed the fur and clothes in lighter tones of brown/red – both to add some further highlighting and to take the shine off the models. 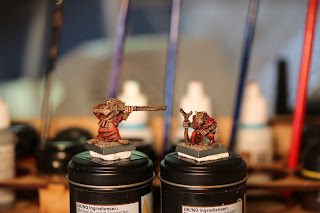 After that, I did some detailing work and gave the skin and wood some extra highlights in different tones of brown to differentiate it from the fur. 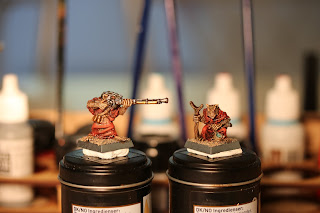 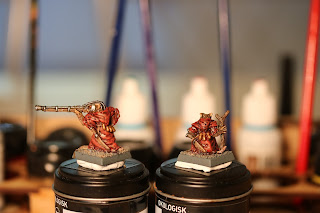 Lastly, I painted the metal and leather. Metal gets a base color, followed by an ink wash and a quick highlight, while I paint leather by washing a base layer of light brown with sepia wash (I can’t remember the name right now – It’s an old GW one), then highlighting a couple of times by mixing the base color with more and more ivory, and finally giving it an extra sepia wash. 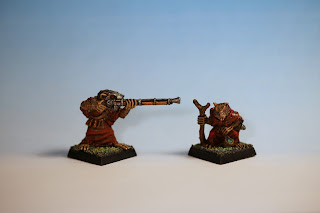 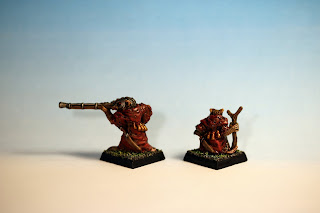 And here’s the final result. Considering how quickly I did them, I’m fairly pleased. I am, however, becoming painfully aware that red was a bad choice for the clothes, as the entire model ends up looking quite “brownish”.

Oh well… They’ll hopefully look good alongside the rest of my painted Skaven. I’ll have to do a “group photo” at some point.

Croaker
Posted by Croaker at 14:13