Going off the reservation

I’m not quitting oldhammer – honest! But sometimes you have to go where the games are, and in my case, that place is called Malifaux. 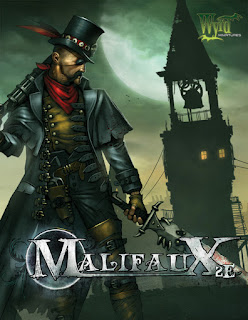 For those of you who aren’t aware of it, Malifaux is a skirmish-level miniatures game set in (and I’m not kidding here – it’s on the publisher’s website) a magical, Victorian, horror, steampunk, gothic, Wild West inspired alternate earth. Whew.

As you might infer from that description, it’s a game of wildly swinging moods and themes.
It is a game where a group (“crew” in the game’s terminology) of Lovecraftian horrors might theoretically face off against a crew made up entirely of pigs. That’s not a metaphor; I’m talking about actual pigs here. 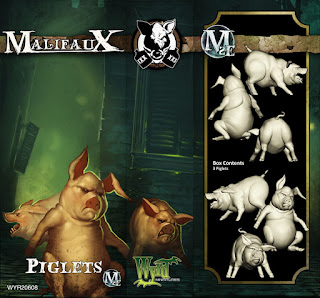 Despite this “everything that was cool in 2010” approach to world-building, the game’s background is remarkably coherent (certainly more so than Age of Sigmar’s), which has a lot to do with the (often) quite excellent stories that make up a large part of the rulebooks. You can listen to them for free on Wyrd Games’ official podcast, The Breachside Broadcast.

To illustrate just how good these stories are (IMO), let me tell you that, though I’ve settled on collecting a single crew (for now), there are at least five more that I want at some point; three of which I only became aware of when I read a really engaging story about them.

Malifaux has a couple of other good qualities (from the perspective of someone who’s got an infant, a wife and a house to take care of in his spare time).

Most importantly, you only need about ten (relatively inexpensive) figures to play, depending on which crew you choose. This means that, even though I only get about half an hour’s worth of painting done each day, I might conceivably finish a crew before Christmas, which is more than I can say for my dwarf army.

Secondly, Malifaux plays in one to two hours, only requires a small table and a bit of scenery and has an active community in my area, so I may actually get to play it once in a while without having to travel to Bring Out Your Lead (not a realistic proposition for me right now). I was always a gamer first and painter second, so this is very positive.

Game-wise Malifaux is very modern, for lack of a better word. It’s build around a familiar core (you take turns activating a model, each of which can take 2-3 actions), but has some interesting twists.

For starters, you don’t roll dice, but instead draw from a deck of playing cards to randomize results. Wyrd sells custom decks, but you could just use a normal poker set.

Each turn you also get a hand of (usually) five cards you can “cheat” in, if you don’t like your draw. As you can keep cards in your hand from turn to turn if you don’t use them, this lets you do some interesting things with probability-optimization and hand-management. For example, do you keep a really low card in hand, so you won’t draw it randomly, or do you discard it to, maybe, draw something better next turn? Does your answer to that question change if you want to do something important at the beginning of your turn? What about an average card, do you keep that? And so on and so forth…

Another feature is that all models have several special abilities – some of which can be combined into powerful effects. As I said above, a model usually has 2-3 actions each turn, but under the right circumstances, you can get as much as seven or eight (or even more, I’m sure). This sounds broken as hell, but when everyone can do stuff like that, it’s just what you have to expect and plan for – and remember that you only have a few units, so you really need to make each one count.

There’s a bunch of other stuff, but if you’re really interested, you can download the rules for free here.

In a way, Malifaux feels a bit like a cross between a miniatures game and Magic the Gathering. Now that may sound appalling to some people, but it speaks to the board-gamer in me, so I like it.

I personally have very little patience with blogs that go veering wildly off-topic for any length of time, so I won’t bother you too much with all this newfangled nonsense, though I’ll probably post some pictures of whatever I paint up, if only to avoid going totally silent for the next couple of months.

Croaker
Posted by Croaker at 10:40