Small steps – and a quiz.

I finally managed to finish my first two halberdiers. I haven’t quite figured out how I want to do the bases, so you’ll have to excuse their half-finished state. 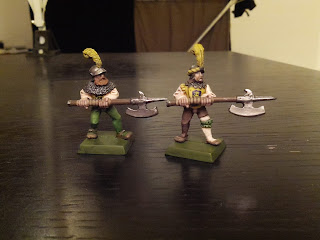 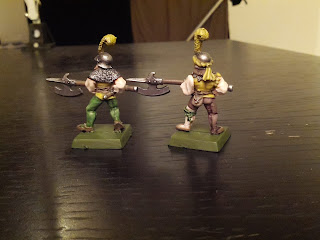 They took me waaaaay too long to paint, though most of the time was spend messing around with different colors… and the eyes. I absolutely loathe painting eyes – mostly because I’m not very good at them yet. In this case, I spend about an hour trying to get them right, and I’m still not very satisfied. I’m quite pleased with the rest of the pant-job though – especially the yellow and white cloth, which I’ve had trouble with in the past.

All in all, these guys took me about seven hours total (one hour per day last week), which is simply too much time for rank-and-file, if you ask me. Not that I’m in a hurry or anything, but it’s hurting my motivation a bit, so I’ll have to crank up the pace.
On the other hand, these two were to act as a prototype for the rest of my Empire army, so the rest will probably be quicker now that I’ve settled on a color-scheme.

Which brings me to the second part of the post. Can you guess what the theme of my army is going to be? I’ll post a picture to the figures without the halberds, so you can get a better look at the coat of arms (assuming you can make sense of my poor attempt at heraldry). I should probably add that I’ve only painted the top half (the rest would be hidden behind the weapon and belt). 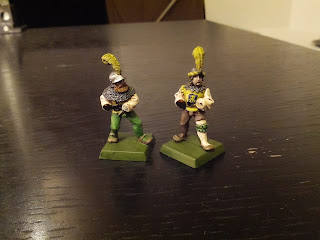 I’ll post the answer some time down the line, but I’ll give anyone who can guess it 100 oldhammer-credits (exchangeable for 2512 fictive gold crowns).

Croaker
Posted by Croaker at 12:04