Last time on Adventures in Questing (odd name, I know – it just stuck with me for some reason) I introduced my AHQ party, along with the first quest I’m going to be running solo. I also mentioned that I’d actually already played through the first expedition (and that everyone survived), which means that this post will function as a sort of prologue to the rest of the play-through.
Also, since it’s now been about three months, I’m slightly fuzzy about the details, so you should take everything with a grain of salt – there’s a fair chance I’ve gotten the exact number of Skaven warriors wrong and maybe even missed an ambush or trap somewhere along the way. 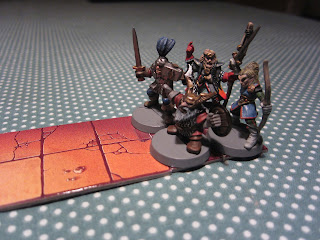 The party entered the dungeon, encountering the usual stretch of hallway with a T-section at the end. 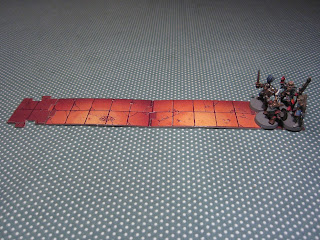 Carefully, Croaker advanced towards the junction – where the party was attacked by a wandering Skaven patrol lead by a champion. But that wasn’t the main problem; Standing behind his larger brethren was a Skaven sentry who immediately darted towards the door further down the corridor to find reinforcement. 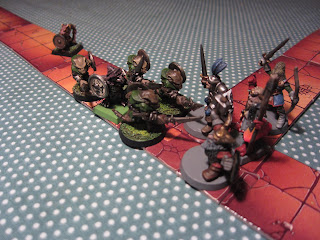 Swarmed as they were, the heroes were unable to stop it from getting away and instead had to concentrate on the problem at hand. 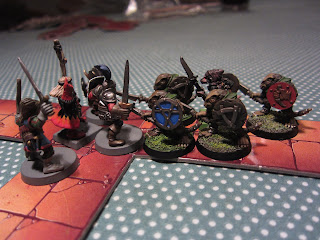 At this point Hans panicked slightly and summoned a fireball to blast the comparatively small group of Skaven. 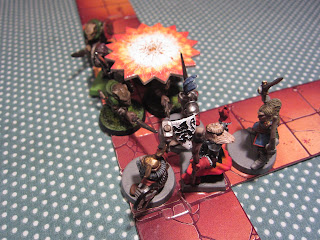 This was stupid. The party wasn’t in any real danger at this point so using a fireball was actually just a waste of money. It’s one of the things about AHQ you really have to adjust to – casting spells (and shooting arrows) cost money, so you really have to weigh the benefit of doing so against the possible treasure you might get out of it.

It did the job though and the fighters were quickly able to finish the few survivors off before readying themselves to face whatever would be arriving next. They didn’t have to wait long, as the very first room to be revealed by the sentry contained an even larger group of Skaven, including two champions, along with door leading further into the dungeon. 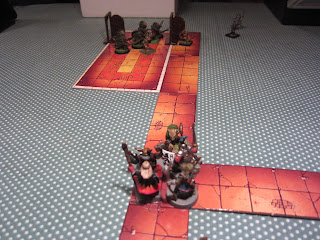 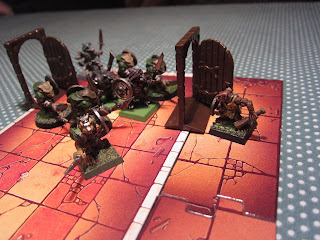 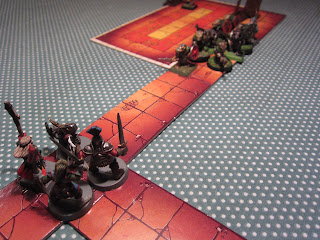 The new group surged towards the heroes only to be met by another fireball. This felled several of the ratmen and wounded one of the champions. The survivors charged the  invaders, only to be met by a wall of steel as Croaker and Allum slew one after another. 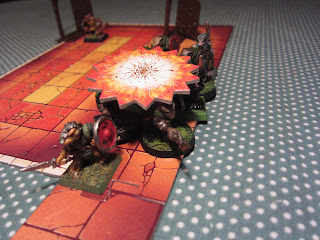 In the middle of the battle, a new Skaven patrol suddenly emerged from the corridor behind the party, forcing them into a fighting retreat towards the stairs they’d recently descended from. Things looked grim indeed. 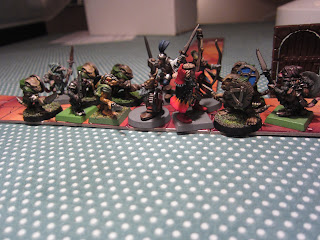 A feature of the solo rules is that each turn (including combat turns) there’s a 1-in-12 chance of reinforcements appearing (it can happen when playing with a GM as well, but there’s a limit to how often) which really forces you to try to end combat quickly.

How to actually place the reinforcements is one of the places where the rules get a bit fuzzy. The solo rules state that the first monster should be placed as close to the heroes as possible, preferably a square from which it can make an attack. On the other hand, the normal rules for placing wandering monsters (including ambushes after the first round of combat) state that they have to be set up as far away as possible while still being within line of sight.

I’m still somewhat torn over the issue but I’m currently using the solo rules as written (even though it means that monsters are essentially “teleporting” into combat with my guys). I might change my stance if it proves to be too unbalancing.

In a stroke of good fortune, the sentry quickly ran into a dead end, and so couldn’t bring even more Skaven to the fight. 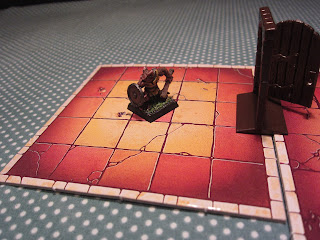 Another area where the rules are mighty unclear is sentries – especially what happens to them when they are out of sight of the heroes. The way I read the rules, the sentry will continue to move away from the heroes as long as the heroes are within sight of any monster (doesn’t have to be the sentry itself).

After a grueling melee, the heroes finally emerged victorious, though wounded and low on arrows and spell components. They quickly finished off the lone sentry and looted the lair. 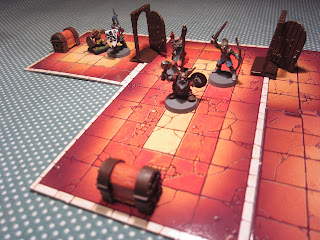 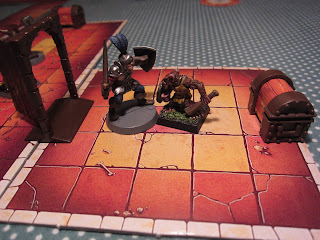 I just realized that there wasn't a chest in that room. Oh well…
Now, what happens should the heroes finish off any monsters in sight while the sentry is somewhere else in the dungeon is a whole other issue. Does the sentry stay where it ended up, keep running off or something else entirely? I’m not sure, but currently I’ve ruled that it stays where it is until the heroes get within LOS, at which point they roll for initiative and resume combat.

Also, since the heroes technically “escaped” (even though they didn’t actually run away), they shouldn’t be allowed to loot any of the bodies. This is another area where you’ll have to use common sense.

Then, after totaling their gains so far, a look of worry passed between them. At this point they’d barely be able to cover living expenses and used arrows and spell components – and after exploring no more than two rooms in the dungeon, they were in bad shape. To make the expedition worthwhile they had to venture further, but Hans was out of Fire Dust for casting Flames of Death (his fireball) and Ellandiel was down to his last two arrows. To make matters worse, the party had been unable to afford a sword for Ellandiel, which meant that the elf would have to fight unarmed once they were gone. Gritting their teeth, the heroes returned to the first T-junction and continued down the only unexplored corridor.

The first room turned out to be empty, but after a couple of turns (there may have been a short combat against a patrol somewhere along the way – I’m not sure), they found themselves in front of another door. Sounds from the other side revealed a large group of Skaven. 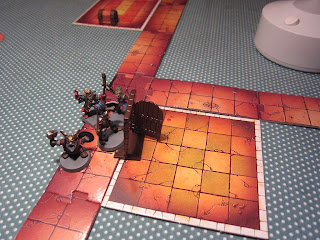 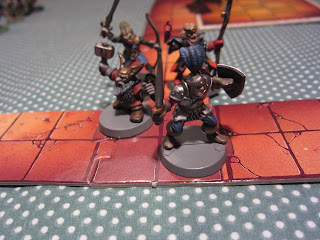 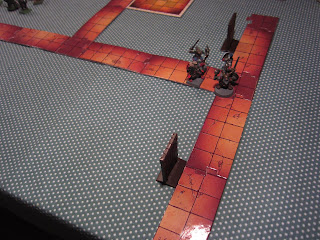 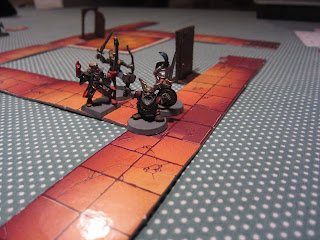 Croaker kicked the door open and sure enough; a veritable horde of ratmen awaited them, along with a set of stairs leading down – this was the quest room. 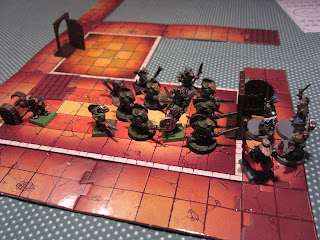 I won’t lie; at this point I seriously considered slamming the door and making a run for it. But, as previously mentioned, I really needed to find more treasure, so I thought “what the hell” and attacked. 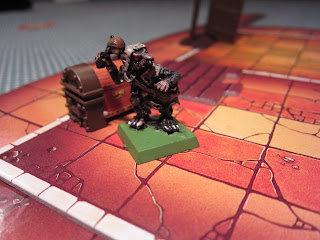 At the back of the pack was a particularly evil looking ratman – a Night Runner.
The following melee was long and grueling. Hans used his last spell component to cast Dragon Armor (+1 toughness) on Allum, to keep the dwarf in the fight as long as possible, but the sheer number of Skaven seemed totally overwhelming none the less. 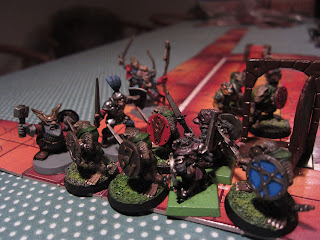 Those numbers were further bolstered as another patrol (no doubt alerted by sounds of fighting) came charging from an unexplored passage. 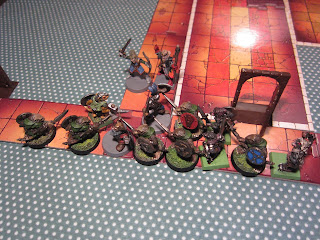 The heroes adopted a strategy of slowly retreating while slaying any Skaven that came within reach. This proved to be very effective, but never the less the heroes were quickly bleeding from multiple cuts were a Skaven had landed a lucky blow. 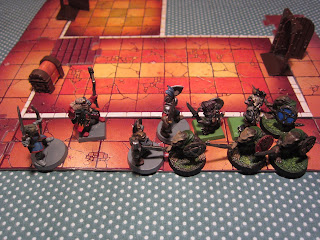 This may be “gaming the system”, but by making sure that none of my heroes were in contact with an enemy at the end of their turn, I could keep them alive a lot longer. The trick is, since you roll a die to see if the monsters move-attack or attack-move when using the solo rules, there’d be about a 50/50 chance of them not being able to attack. I also staggered my fighters (see the pictures), so both Skaven in contact would attack Croaker (because he has a lower WS than Allum) if they did move-attack.
This tactic only really made sense because Ellandiel didn’t contribute to the fight until the very end, so it’s not a silver bullet.

Finally the throng of ratmen had been whittled down to a few individuals. The Night Runner made a last desperate attack, but was wounded by one of Ellandiel’s remaining arrows and then unceremoniously cut down by the warriors. 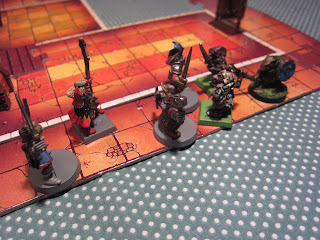 The victorious, but gravely wounded heroes quickly looted the bodies and treasure chest, and legged it for the stairs out as quickly as their legs could carry them as they couldn’t risk meeting another group of Skaven. 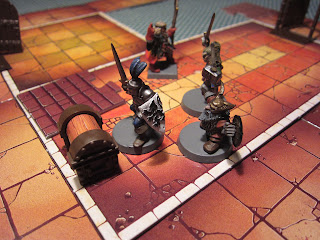 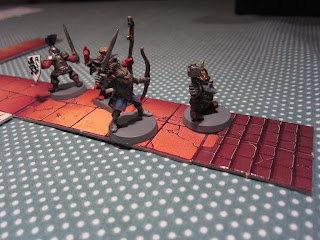 They'd made some mistakes, but at least the heroes had found the stairs down and made a bit of money – and next time they’d be better prepared.

The finished map of the level looked like this: 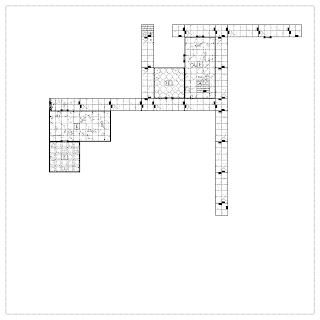