Here’s a picture of my painting station: 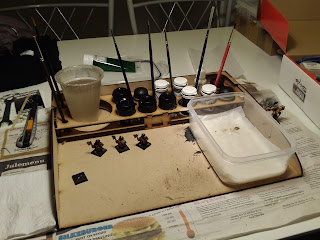 If you’ll excuse the crudeness; Holy F*cking Christ this thing is amazing.

Some of you veteran painters may be sniggering to yourself now. Why am I surprised? It’s not like the concept of a Wet Palette is some well-kept secret, accessible only to the inner circle of a secret painter’s society. But you must remember that I only recently returned to miniatures painting after a decade long break – and back before I stopped, the Wet Palette really was a relatively unknown phenomenon.

Since returning to the hobby I’d been reading and watching some painting guides and one of the tips that kept popping up was to use a Wet Palette. I didn’t immediately jump on the bandwagon because I never used one before and I believed that I was doing ok. “Sure, I’ll try it our eventually” I said to myself, “but how much of a difference can it really make if everyone isn’t using it?”

Well, I finally got around to making one and after using it for only about an hour, I’m here to tell you; it really is that great. I can’t properly explain it, but everything is just so easy. The paint flows better and doesn’t dry up, which is great in itself, but mixing colors is also much easier and I don’t waste nearly as much paint, as I can mix small amounts as I go along.

I don’t know if I can fully explain it, but it just works. Get one! If you don’t how to make one yourself, I can recommend Atom Smasher’s guide at the Tabletop Minions Youtube channel.

Croaker
Posted by Croaker at 11:39

Email ThisBlogThis!Share to TwitterShare to FacebookShare to Pinterest
Labels: painting