We return to our heroes as they steel themselves to face the final swarm of skaven, lead by the the warlord of the entire clan.

As the rats surged forward, Croaker quickly retreated into the small room where the rest of the party had taken position. Hans then muttered an incantation to surround Croaker with a band of gleaming dragon scales, boosting the warriors already formidable defenses.

Taking up position immediately behind a door in order to bottleneck the monsters is basically the signature “boring dick-move” of AHQ, but I was very much outnumbered at this point, and Allum was already teetering at death’s door, so I didn’t want to take too many chances.

I’ll probably dedicate a post to this topic at some point, but not now.

As the mass of ratmen closed, Hans summoned up another blast of fire, taking out a chunk of the formation. 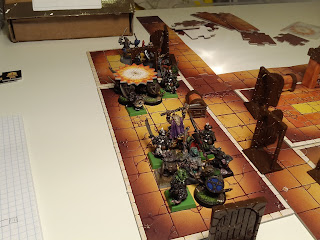 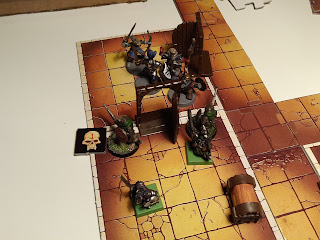 Undeterred, the rest of the skaven charged through the doorway.

Meanwhile, the two sentries continued exploring, but, to the very great relief of the heroes, they found nothing but closed off corridors.
[picture + map] 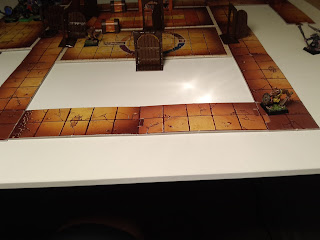 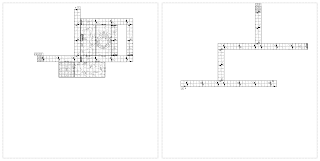 Back at the melee, the skaven force had been unable to make headway against the heroes. Each time one of them pressed through the door, it was cut down before it could raise its weapons.

I kept rolling “Attack and move” on the tactics-table, which meant that as long as I could kill one skaven each turn, none of them could attack my party. “Boring dick-move” indeed – though I was quite lucky to pull it off as well as I did. A roll if “1” (reinforcement + “move and attack”) might have made a bit of a mess of my plans.

As soon as the warlord came within sight, Hans used the last of his Fire Dust to blast it with a fireball, wounding the creature. 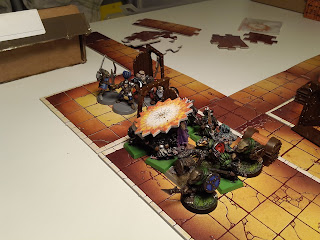 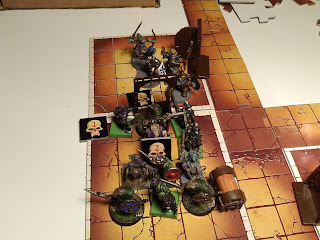 Eventually the group of skaven had been whittled sufficiently down, that the heroes risked attacking into the large room to get to grips with the remaining stragglers. 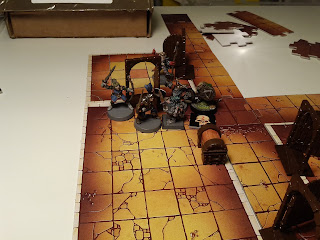 After that it was all just a matter of cleaning up. The heroes quickly cornered and slew the two sentries and proceeded to loot the rooms. As they found more gold than they could carry, they pooled the remains (235 gc to be precise) in the first large room and then headed back to town. 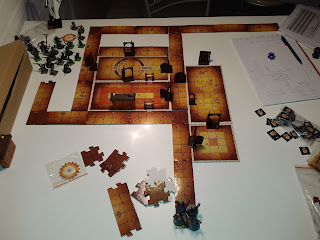 Safely back, it was upkeep-time.

The heroes regained all wounds and fate, and received another point of fate because they’d completed the quest in two expeditions.

As they’d found a jewel worth 150 gc, they had a total of 1150 gc to spend, 100 of which went towards living expenses. They then rolled “Risk pay” on the random event table (again), which had no effect.

Finally, it was shopping time.

First of all, Allum and Croaker hit the gym. The dwarf got +1 wound since his low wound-score had proven to be a severe liability and Croaker got +1 strength, truly making him a force to be reckoned with (six damage dice baby!).

Hans also got some training, learning “Still Air” (useful for making those d*mn sentries stay in one place”) and 10 spell components.

Finally, it was time to attract or hire henchmen. Since all four heroes had gotten a point of fate, I could theoretically attract four henchmen at reduced cost, but I figured two would be enough to begin with (which had nothing at all to do with the fact that I only had two painted up – oh no sir!)

All in all a very successful quest.

Epilogue
I wasn’t entirely finished though. There was still a bit of gold in one of the rooms near the final set of stairs, so the party once again ventured down into the dungeon (completely forgetting to bring their two henchmen along).

The door to the room in question had been closed, so the drew their weapons and kicked it open, finding a skaven warlord and its bodyguards on the other side. 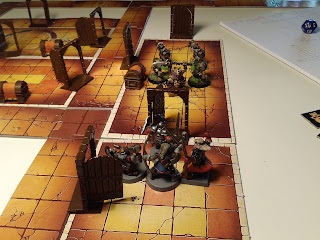 The rules are somewhat vague on this matter, but by most interpretations, any room that hasn’t been completely emptied of treasure will contain a new (random) group of monsters it the party leaves the dungeon and returns at a later time.

The heroes made quick work of the ratmen, picked up the remaining treasure (as well as the 115 gc the new monsters had been carrying) and returned to town, where they paid 170 gc in living expenses (the extra 70 gc went towards retaining the henchmen) and promptly got robbed! (by rolling “pickpocket” on the random events table). Fortunately, they had already spent most of their cash, so they only lost 23 gc.

To wrap things up, Ellandiel got some archery training (+1 BS), and the remaining 175 gc were divided amongst the heroes.

And that’s the end to a complete game of Advanced Heroquest. Hope you’ve enjoyed it – I certainly have.

Croaker
Posted by Croaker at 11:05