We all have to balance considerations of time versus money versus keeping-your-significant-other-reasonably-happy when dealing with our hobby. Nowhere is this truer than when it comes to terrain.


You can see some truly astonishing home-made stuff on the internet, but much of that takes a long time (and a certain amount of talent) to make. Conversely, you could buy everything you need as pre-painted resin sculpts, but probably not without selling your car to raise enough money.


Like most other adults with families and full-time jobs I know, I’ve certainly got more money than time, but even so I cannot afford to buy everything I’d like to. For a long time that meant not buying any terrain, as I don’t actually play very many games. I did print out some paper buildings and even assembled a few of them, but that was it.


However, as I mentioned in an earlier post, I’ve actually been playing a few games of Malifaux (a game that’s heavily reliant on terrain) recently, so I really couldn’t wait any longer.


Knowing that I’d have to get things that didn’t take too long to put together, but still having a fairly low budget, I turned to eBay.


Here’s a few shots of what I’ve got so far: 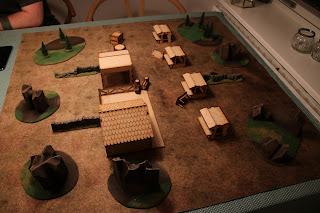 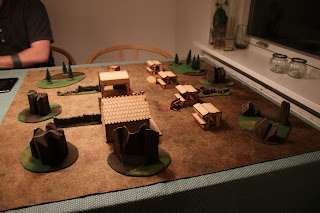 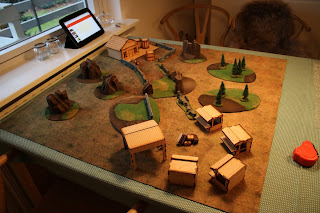 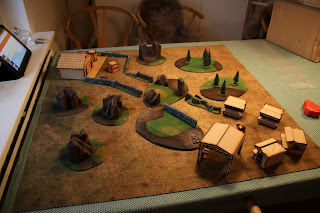 The shots are taken from a couple of Malifaux games, just before deployment.


As you can see, it’s basically the same pieces of terrain, but I think we managed to create two fairly dissimilar setups.


If you don’t include the mat (which isn’t strictly speaking necessary, though it absolutely enhances the visual appeal of the game), this setup cost me around £57(+postage) - a very reasonable price if you ask me. I also got a few additional pieces of terrain that aren’t shown here.


The table is set for Malifaux, which dictates a fairly dense setup. I’m confident that the same amount, more spread out, would be perfectly fine for a game of Warhammer.


It’s basically made up of three parts:


First a couple of walls (including a set of older citadel plastic walls) which I got from a random seller. You could probably get a good deal on something similar with a few minutes of searching.


Secondly a “12-piece universal battlefield set” from “terrains4games-com”. They make some very good looking, and quite cheap stuff. If I do have to criticize something, I’d say that the hills are too low (barely 1”) and the woods could use a few more trees. Other than that I’m very happy.


Lastly I’ve got some buildings from “thetrolltrader” (ttcombat). A fairly well-known eBay shop that also has its own line of laser-cut MDF buildings. I bought the “Moonshine distillery” (which came with a lot of crates and barrels) and the “Market set”. They aren’t the most detailed MDF buildings on the market, but they still look very nice, and they are hard to beat on price.


Do be warned that they are scaled to fit with the “new” 32mm standard and would probably look too big for proper Oldhammer games. Looks great with Malifaux though. Also, you will have to assemble them yourself, which might take some time, depending on your personal expertise with this kind of stuff.


I’m honestly not sure where the game mat is from (I got is as a gift). It might be a “3x3 mousepad mat” from http://www.deepcutstudio.com, which would set you back another 35€. It looks very nice though (and comes in different sizes and qualities).


So there it is: a way to get a table ready fairly quickly and cheaply.

Croaker
Posted by Croaker at 13:54