Ranger up! / Trouble in paradise

Once again, I had a very unprolific week, though this time it wasn’t for lack of trying – I’ll get back to the reason why later.

Even so, I did manage to finish two figures – these guys: 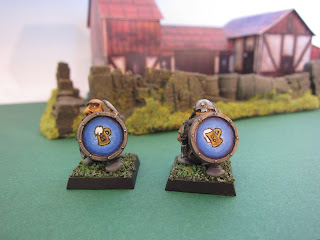 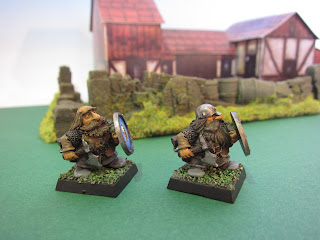 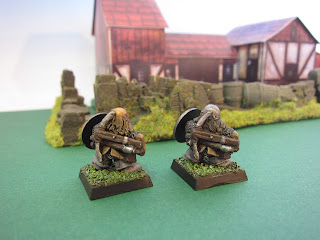 “What’s that?”, you ask, “Weren’t you supposed to be painting an Empire army? - So what are you doing messing around with a couple of dwarf rangers?”
Well… that’s a good point, but the two things don’t have to be opposites. I always intended to include some fantastical elements in the army and a unit of dwarf mercenaries seemed like a natural place to start. Besides, I got a good deal on a couple of rangers, and once I saw them up close, I immediately fell in love with the sculpts – they are absolutely lovely. So I bought some more – a whole unit in fact, including Joseph himself: 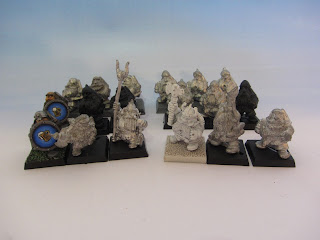 I’m afraid that my very basic paintjob isn't really doing them justice, but I really wanted to finish something, so I kept it very simple. Just a base layer, followed by a wash and a single highlight (except for the faces, which got a little more attention). In the end, I’m reasonably proud of the shields, which worked out well, but the rest is probably too simple (bordering on simplistic).

That aside, I’m trying to limit the colors to buff, brown and grey, with the shields adding a little color, in keeping with tradition, and I’m very much looking forward to seeing the completed unit, once it gets done.

As to the reason for my slow pace this last week, It’s really all due to an error of judgment on my part. Here’s a picture of my workstation: 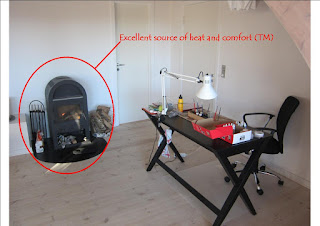 It’s really comfortable, close to the stove (which is nice this time of year), and I can even see the television, if I angle it a bit. In fact, I’d inadvertently created the best working space in the house, which naturally came back to bite me in the arse when the wife eventually caught on.

She’s a teacher and needed somewhere to grade mid-terms. I could have expelled her to the dining table, which is in another room, but like many women she seems to freeze all the time, and she just seemed so happy sitting right next to the fire.

So I relented. The dining table isn’t really optimal for painting (too little light and I wouldn’t want to risk spilling paint all over it), so I contented myself with the couch until she was done, which meant that I only really had a couple of hours left this week to get something painted up.
In the end, we decided that we’re going to get a desk with room for both of us, so I guess it's a net win…