Happy new year everyone. I’ve been back to work for a week after an unusually long Christmas vacation, and for some reason I just couldn’t get back into my usual rhythm, so I really haven’t been doing much painting – and what little I did, ended up being so appallingly bad that I put the figure right back into the jar of acetone.

Instead of showing painted, I want to talk a little about some minis I got a while back. First, though, I have to ask a question: How old and/or well-known must a story be before spoiling key elements of the plot without a warning is o.k.?

Maybe it mostly depends on the type of story. Certainly, mysteries should be treated with greater sensitivity than the average romantic comedy, but at some point, it just seems overbearing to assume that your audience doesn’t know certain well-known plot-points – the ending of Romeo and Juliet comes to mind.

I’m asking because I want to talk about the villains of The Enemy Within (TEW), and though it’s quite old (as role-playing campaigns go), it’s really impossible to do that without ruining a lot of the fun of the campaign for anyone who might play it in the future. Even showing pictures would be thoroughly spoilery.

Therefore, for the benefit of the two people in the world who are interested enough in the subject to read this, but still haven’t been exposed to TEW, I’ll but in a break.

In my quest to collect the figures associated with TEW, I’ve been lucky enough to get hold of the two main villains (at a reasonable price, I might add). Here they are: 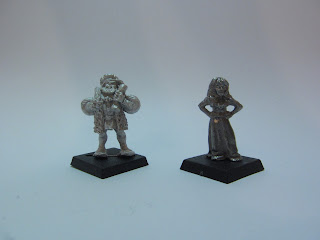 The Teugen figure is awesome, but I’m slightly disappointed by Margritte. It may be because Teugen was sculpted specifically for the campaign (I think), while Margritte seems to have been coopted from the existing villager range (the figure is originally called Tes, though my copy has had the tab filed off). I may eventually find an alternative, to better align with her appearance as it is when the players first meet her: 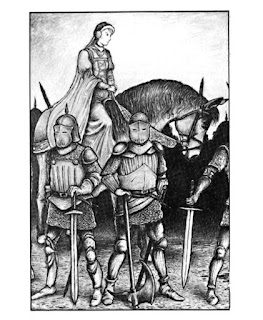 The main villains of TEW are actually an interesting case study in escalation through a long RPG campaign, and largely avoid the “I want to destroy the world, because reasons” trope of many fantasy stories.

The antagonist in the first part, Mistaken Identity, is not even really a “bad guy”. Adolphus Kuftsos is a bounty hunter who’s hunting what he believes to be a chaos cultist. He is certainly ruthless, being willing to burn innocent civilians to get his mark, but in many ways he’s acting similarly to most heroes in RPG’s.

The next bad guy is Johannes Teugen, head of the Bögenhafen merchants guild. Though undoubtedly evil, his ambitions are largely understandable and small-scale (become rich and powerful). Of cause, he’s being double-crossed by someone who very much wants death and destruction, but that only serves to highlight his own humanity.

In Death on the Reik, Margritte von Wittgenstein ups the ante again. Even though she’s currently content to perform insane experiments on the poor villagers of Wittgendorf, we are told that her ultimate goal is to create an undead army. She fits closer to the standard “cartoon villain” mold than the previous two, but then again, most of her family has become equally insane as a result of growing up atop a chunk of warpstone, and in many ways, Margritte is simply part of the tragic story of the fall of the Wittgenstein family.

Next up is Carl-Heinz Wasmeier, one of the three law-lords of Middenheim and cult leader. 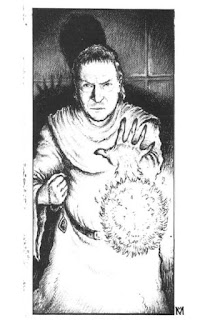 Where the barony of Wittgenstein is a small enough that it has been deteriorating for more than a century without anyone really noticing, the fall of one of the largest cities in the Empire to Chaos would be a disaster, which is just what Wasmeier is planning. He is closer to being a one-note “bad guy” than Margritte or Johannes, but his back-story (or lack thereof) doesn’t really matter in this instance – the heroes will be quite busy enough simply figuring out who’s behind their troubles.

It is not until Something Rotten in Kislev and Empire in Flames that the heroes move on to non-human antagonists, but I’ll leave these last two modules for another time.

What’s really interesting about the first four villains of TEW is that they are all authority figures (even Adolphus, after a fashion) who the heroes can’t initially confront openly, without putting themselves in a hopeless situation. Maybe that’s one of the things that made TEW so groundbreaking. Simply “kicking in the door” and charging isn’t an option, so the players have to approach the problem differently than they are maybe used to (unless they play a lot of Call of Cthulhu).

There are also numerous colorful “lesser” villains spread throughout TEW, but many of the associated figures are extremely hard to get hold of. The only one I’ve got thus far is Ulfhednar the Destroyer, who’s one of my favorite Chaos warrior sculpts of all time (and not all that rare, which is nice from a financial standpoint): 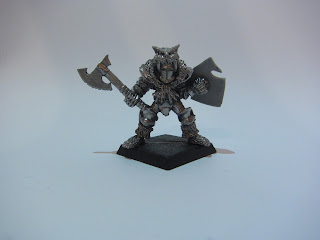 Croaker
Posted by Croaker at 11:14

Email ThisBlogThis!Share to TwitterShare to FacebookShare to Pinterest
Labels: TEW, The Enemy Within, WFRP