Some time ago, I promised to eventually reveal just what the theme of my empire army would be. Well, the time has finally come…
… and the answer is: It’s going to be based around the town of Bögenhafen, or more specifically the army of Graf Wilhelm von Saponatheim.

In keeping with the overall topic of this blog, I always wanted to base my army on some of the older WFRP material, and as Reikland is by far the best described region (maybe except for the city of Middenheim), that province was a natural choice. I also wanted a smaller force – perhaps a town garrison – which ruled out Altdorf itself.
From there, Bögenhafen became the next logical setting. It is both the largest Reikland town and, by far, the easiest to find information on.

I figured that I’d need to settle on the following:


Colors
If you google “bögenhafen army” you’ll find a lot of pictures of soldiers in white and purple. I don’t know where this idea originated, but I’ve traced it back at least as far as the 6th edition Empire army book 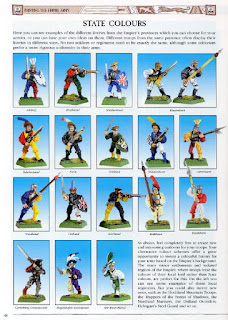 This is obviously utter hogwash. If you’ll excuse me getting way too worked up over an inherently silly subject, but that is a terrible color-scheme for common soldiers. One; as anyone who’s spend a great deal of time outdoors will tell you, the white is only going to be white for about ten seconds. Two; purple was a really expensive dye in medieval (even late) Europe, and should be the same in the Empire.

Now, Teugen wears purple on the cover of Shadows over Bögenhafen (SoB), which might cooperate the idea that it’s the “town color”, but he’s rich merchant and can actually pay for expensive clothes. 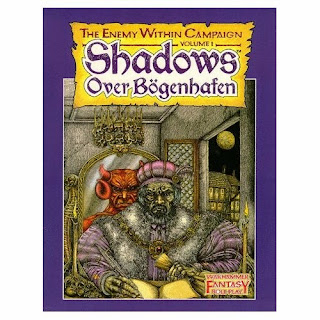 I know, I know – this is fantasy medieval Europe, and if I’d really liked the color, I wouldn’t let history hold me back, but I don’t really like the scheme all that much, so this is a deal-breaker for me. Besides, speaking about the “army of Bögenhafen” doesn’t really make sense, but I’ll get back to that later.

So what colors am I going to use then?
Well, Von Saponatheim himself might get the purple-and-white, and if I do some kind of personal guard, they’ll get it too.

As for the common soldiers, the only thing I’ve got to go by is this passage from SoB, regarding the town watch: 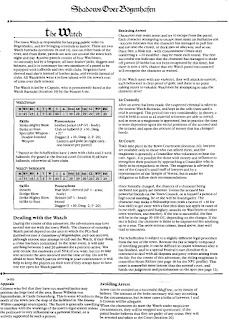 That’s much more reasonable – yellow tabards with the town crest on, over leather or mail. Incidentally, the two soldiers I painted for the army some time ago are supposed to be watchmen: 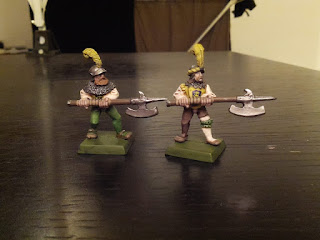 I’ll paint the rest of the common soldiers in similar colors, maybe with a purple sash or armband.
I’m taking my inspiration for the color-scheme from a picture I took from my basement window this fall: 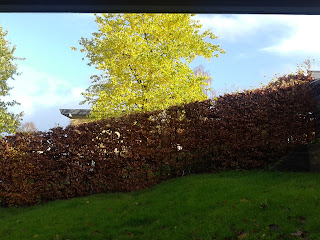 Flags
This was a bit easier. You can see the Bögenhafen flag in the color map from SoB (the middle one): 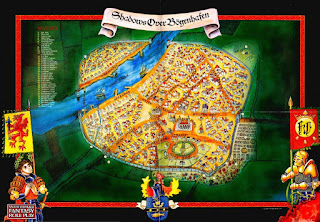 I found Saponatheim’s coat of arms in a much later picture (from WFRP 3rd edition). It’s a bit grainy, but it’s basically a purple stag’s head:

The man leaning against the tree is Sigfried von Saponatheim, (I think) Wilhelm’s younger brother.

I’ll use some variation of the stag for the army standard and guard units and the Bögenhafen standard for the town watch. 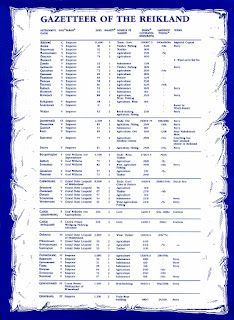 This is a page of the gazetteer from Death on the Reik. You’ll notice that Bögenhafen only has 300 poor quality (the denominated by the “c”) militia. These would include the town watch and could hardly be classified as an “army”.

That’s why I want to make this the army of Graf Wilhelm von Saponatheim instead. If you look at his seat of residence, Castle Grauenburg, you’ll see that he can field 50 “a”-class and 100 “b”-class full-time soldiers (probably knights/men-at-arms and footmen, respectively). Add those to the 300 militia from Bögenhafen, and it becomes much more interesting.

I also want to include some fantastical elements, to keep the army from feeling too generic. A unit of dwarf mercenaries (mentioned earlier), a wizard and maybe a unit of ogres should do it.

I think I’m going to do something along the lines of:

From Castle Grauenburd (i.e. using the purple stag banner and including elements of purple in the uniform):
From Bögenhafen:
Mercenaries:
It’s a rather ambitious project, I know, but I can get most of the models from Wargames Foundry, so it should be doable.

You see all that stuff I’ve just spend a lot of time researching and writing about? Yeah… I’m not going to do all that – at least not right away.

“What!” You cry, “Then why would you waste out time like that?”

Well, the short answer is that I’d already done most of the work, so I thought that I’d post it anyway – and besides, I’ll probably do it eventually, just not right now.

It’s all Prince Ulther’s fault really, but I’ll get back to that next time…

Croaker
Posted by Croaker at 21:57

Email ThisBlogThis!Share to TwitterShare to FacebookShare to Pinterest
Labels: Empire