Some time ago I bought these on eBay: 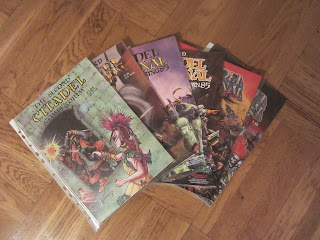 What you see there is almost all of the first round of Citadel journals and compendia (everything except the very first compendium) in excellent condition – near mint in fact.

I got them at an oddly low price through an auction, but I guess that the otherwise ubiquitous inflation that seems to have hit the rest of the oldhammer market hasn’t reached the old journals yet (for brevity’s sake, I’m including the compendia under the heading of “journal”). Considering the dedication it takes to keep paper journals safe for this many years, I consider myself very fortunate, though I’m now facing the problem of almost not wanting to touch them for fear of causing damage – something I wouldn’t worry about if they were in worse shape.

There is an easy solution though. Through the grace of Orclord over at solegends.com we can all read these old journals right here. You could also get a Scribd-account (something I’d recommend that any oldhammer-fan do anyway), though sometimes the scans at SoLegends are better. I then have the opportunity to (very carefully) browse through the actual journal and take in all the really small details, which is a great pleasure I can assure you.

Looking through the journals, I got the idea of doing a “let’s read” – very much inspired by Orlygg “Acceptable in the 80’s”-series, which you should absolutely read as well if you haven’t already.

The journals were published during the days of 1st and 2nd edition WFB, and as such might be too “retro” even for dedicated oldhammeres. However, appearing at the very nascence of WFB they give a really unique insight into the development of the game and associated miniatures.
They also precede my own entry into the hobby (I was still in diapers at this point in time), so I’m reading them with a fresh face – ready to be amazed at the wonders of a time when using oil-paints wasn’t unheard of.

To keep these posts from getting too long, I’ll only discuss sections of special interest (I also won’t post a picture of each and every page), though I still urge you to read through the entre journal.
Even then, I’ll probably end up splitting each journal into several entries.

So, without further ado (except for noting that I’m looking at the US-version), Let’s read: The first Citadel Compendium 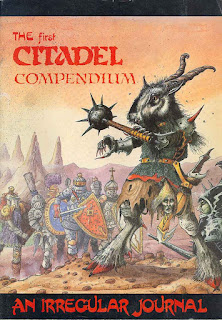 First up, we have an introduction to the compendium itself: 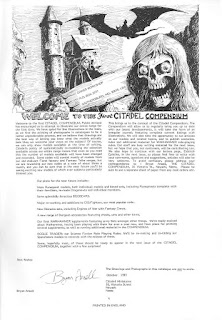 Here we are introduced to two very interesting concepts. The first, and most important, was Citadel’s policy of constantly reworking their range of figures, which meant that a particular sculpt might go out of production at any time. The compendium merely catalogues those sculpts which Citadel intended to keep in stock – at least until the release of the next compendium.
I know that the limited durability of the molds used at the time was a large part of the reason for this, but it still seems like a strange thing in this age of near-unlimited availability of individual sculpts. Interestingly, though I don’t follow GW all that closely these days, it seems to me that they’ve been trying to re-implement this situation with a string of more-or-less limited edition releases over the recent years.

The second concept is Citadel’s reason for initially using line-drawings in their catalogues; which is that printed photographs at the time lacked the necessary quality to fully illustrate miniatures. As someone who still haven’t got the faintest idea what Sigrid and Hilda from the DotR set are actually supposed to look like (and I even own the original poster), I can sort of get behind this idea. On the other hand, the drawings do lack a certain je ne sais quoi, so on balance I guess I’m glad they eventually changed that policy. 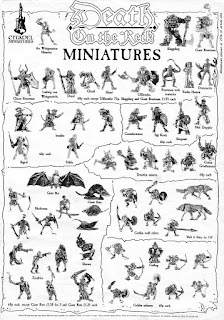 Can you identify them?

At the bottom of the page is something that I’ll probably have to make a running joke (or possibly a drinking game) out of; the “near future” plans for the release of something that wouldn’t be published for several years, in this case Rogue Trader (*drink). This goes hand in hand with a mention of the Realm of Chaos supplement for WFB a few pages later (*drink again).

Next is an introduction to WFB. 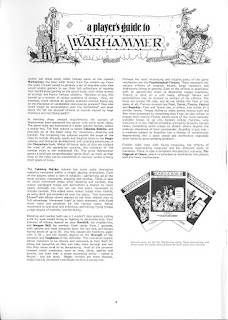 I won’t go too much into this as 1st edition is very much an unknown quantity to me. Most of the features described seem to line up with later editions though.

After that we have an article with additional rules for WFB, some of which definitely didn’t make it into later editions (return fire, dismounting opponents), though it also includes rules that we’d consider quite natural today, such as firing arcs and the rule against wizards using armor.
We can also see a bit of WFRP in the section on “personal characteristics in special situation”. The two situations in the example, bluffing and persuading, are thing that any WFRP player will have tried countless times and even establishes the later percentage based tests.

Next up is the one thing I actually knew would be in the compendium: The Legend of Kremelo the Slann – A Warhammer scenario. 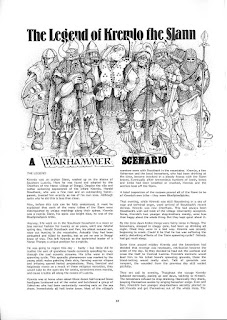 It’s a wonderfully weird idea. An orphan slann, raised by Norse settlers in Lustria, who’s leading a raid on his old tribe after it attacks his adoptive village. This is about as oldhammer as it gets. Slann, Lustria, alcoholism and a scenario where you can’t be quite sure that your allies aren’t trying to kill you (something that’ll be a recurring theme in later scenarios).

Being someone who previously didn’t have any real interest in Lustria, as I read more of the old stuff about it I’m increasingly saddened that Richard Halliwell’s supplement on the continent (also mentioned in this compendium - *drink, I guess) never saw the light of day.

After this little gem we have something that’s become a bit of a stable in Warhammer; Goblinoid animosity. 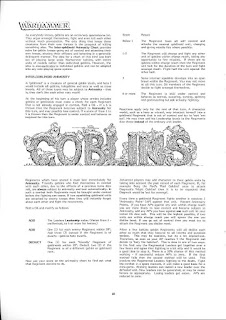 The exact rules have changed a lot over the different editions, but the basic concept is a familiar one. If you are interested in the subject, Zhu has written more about it in a broader context here.

We now get to the meat-and-potatoes of the compendium, the models, but I think I’ll save that for next time.

End of part one…