Welcome back to this “Let’s Read”. We pick up from Last time, roughly half way through the First Citadel Compendium, as we get to the miniatures.

The compendium immediately diverts from the previously stated policy of using line-drawings by giving us a photograph of the, magnificent, Citadel Giant (though they do use drawings to illustrate alternative heads and hands). I guess this decision can be explained by the sheer size of the figure, which probably made it a lot easier to take photos of. 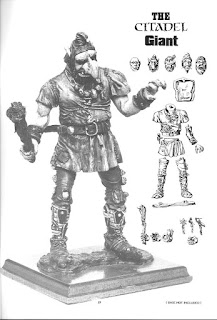 I’d love to get my hands on this big fella, though, from what I hear, that would require selling the TV to raise the necessary cash. It’s also, strictly speaking, too big to really be practical in a game setting, but it’s quite awesome all the same.

After the giant we get to the aforementioned line drawings; in this case of the early C-series miniatures. The selection is firmly grounded in the RPG scene, with the minis being divided into the standard fighter/wizard/cleric/thief categories (dwarfs getting their own listing), in addition to goblins, armored orcs and so on.

To be perfectly honest, these pages leave me a little cold. It may just be because I’m quite uninterested in most of Citadel’s pre-slotta output, or that the actual figures rarely live up to the sketch, but I’m finding it difficult to visualize how the mini would look like in real life.

There are a couple of exceptions though, the first one being this page: 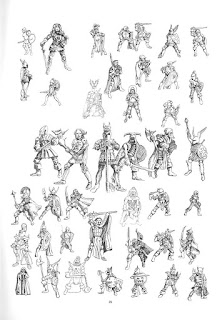 For all their virtues, Citadel produced preciously few good, and appropriately clothed, female miniatures during the 80’s, but the two in the top row might fit the bill (though I must confess that I haven’t seen the actual figures). 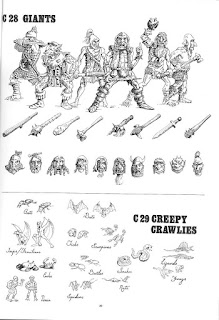 Maybe I’m biased towards the larger figures, but these just look awesome. You can see the actual minis here.

Rounding out the line-drawing section, we have the figures for the Kremlo scenario. 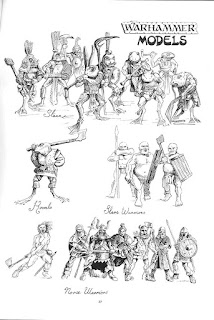 These are quite evocative as well and in general the illustrations in the compendium seem to be better with the more outlandish characters, such as the Slann.

We then encounter another instance of Citadel breaking their own rule with three pages of photos. These perfectly illustrate the reasoning behind the rule – being nigh-indecipherable. I mean, I can see the general outline of the figures, but in many cases I’m left guessing at the details. 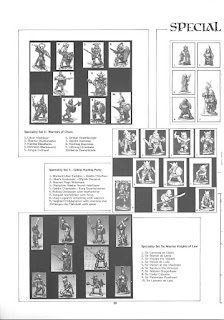 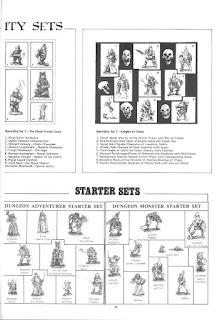 It doesn’t help that many of the figures of this period are quite compact (probably necessitated by the casting process), which further blurs detail in the low-resolution prints. I like the stone thrower though. 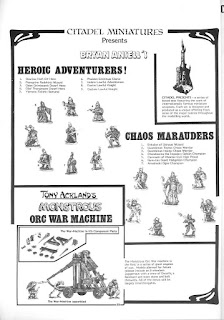 Moving on, we return to our drinking game in a major way with two half-page ads for Realm of Chaos and Rogue Trader (and a half page for Forces of Fantasy, but that actually came out relatively soon afterwards). Time to *Drink! (or perhaps *drikn? at this point).

After this, we get something that would become something of a staple of the journals – a painting article. It’s worth dwelling a bit on the faux-articles above the headline for the chuckle it should elicit: 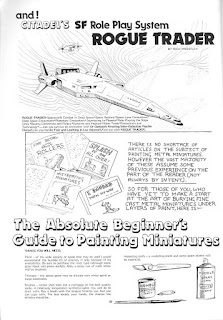 It’s all very basic (as it’s supposed to be), but the advice is good all the same – in fact, it’s exactly the kind of article I wish I’d had access to when I started out myself and didn’t have the faintest idea about how to do the shading on my figures.

We return to game-related stuff with an article about using Sci-Fi in games of Warhammer. 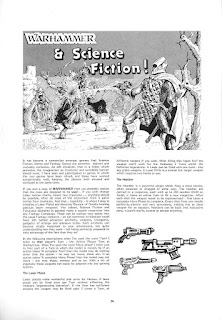 It’s interesting stuff, and the introduction gives a good insight into the original philosophy behind Warhammer. It reads: “The rules are designed to be used – if you wish to change rules […] anything should be possible”. This is surely a sentiment that would give modern tournament players fits, but it very nicely aligns with core Oldhammer values.

The main part of the article is a set of rules for various more-or-less futuristic weapons and types of equipment. Worthy of note is that bolters (for once) are actually as dangerous as rifles firing small self-propelled rockets should be (this includes possibly blowing up in their owners hands): 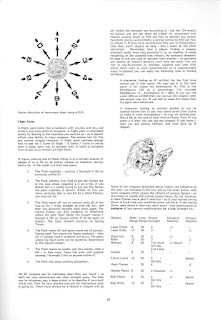 Remember to add one to the strength to get a contemporary value.


Also included are the, perhaps,  first use of the 2”-apart loose formation that would become standard in Rogue Trader/40k, as well as an outline of a campaign that uses the Sci-Fi rules. I'm actually very impressed by this article - you could likely get some very satisfying Sci-Fi games going just using this and a copy of the main rules (even the 2nd edition would work, I think).

The last article of the compendium is, I believe, another first; rules for generating chaotic attributes, along with an article on how to convert figures (quite useful if you intend to randomly generate your mutants). 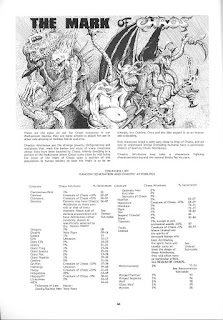 Even though many of the exact rules are different from later iterations of the list, I can recognize a lot of the mutations, and there’s even mention of the concept of followers of Chaos gradually gaining attributes and maybe becoming chaos spawn if they gain too many.

Final thoughts
If there’s one thing I’ve taken away from this read-through, it’s just how many of the ideas we (or at least I) usually identify with much later publications are present at this early point in time. It’s pretty easy to see a clear line from this compendium to WFB 2nd and 3rd edition, WFRP, Realm of Chaos and Rogue Trader. I’d even go as far as saying that it should be essential reading for any fan of 1st edition as well as anyone who’s interested in the development of the hobby.

I’m also generally amazed at the sheer amount of stuff they manage to cram in to less than 50 pages. It’s truly a treasure-trove of inspiration.

Next time we continue our exploration into 1st edition territory with The Second Citadel Compendium.