Even though Prince Ulther and his Dragon company is the unit that finally convinced me to switch to dwarfs I wanted paint something else first – namely the bolt thrower I got along with them. War machines are always good centerpieces and usually paint up really quickly, so I figured that it’d be a nice way to kick off the project.

As the two cornerstones of my initial army will be Bugman’s Rangers, with noticeable blue shields, and Ulther’s Imperial dwarfs, with red tabards and shields, I’m going to give the rest of the army red and blue uniforms as well, which will hopefully tie the whole thing together nicely. 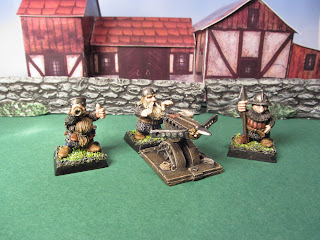 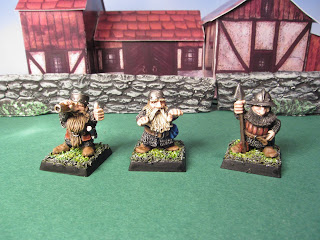 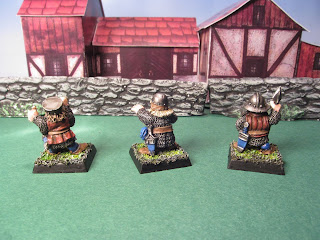 The pictures are slightly overexposed, but I hope you get the general idea.

The bolt thrower is a really cool model, as are the crewmen. As an added bonus there’s only a single fully-visible eye between them, what with all the squinting going on, which is quite a relief for me.

Painting-wise I have a few observations. I’m not totally happy with the blue parts of their clothes – it's something I’ll have to work on – but the red turned out really well, and was supremely easy to do. Something about the paints I used just worked together in a way I haven’t experienced before.

Here’s what I did:

First a base layer of The Army Painter’s “Oak Brown”. It’s a Danish manufacturer, and I’m not sure if you can get it elsewhere, but it’s basically a reddish dark brown – somewhat akin to the old Citadel “Scorched Brown”.

Next a layer of Formula P3 “Brown Ink”. This ink is really (really, really…) red, and, in my opinion, totally rubbish for areas that are actually supposed to end up being brown, but it’s nice when you are trying for a muted red.

After that has dried, and it’s here that something odd happened, I highlighted with Vallejo “Cavalry Brown” (which, like the ink, is more red that brown IMO). I don’t know why, but for some reason these colors just seamlessly blended in a way I’ve never experienced before, and I was able to vary the highlights by simply giving certain areas a slightly heavier coat.

If I’d wanted a brighter red, I could probably give it an additional layer of red (something I’ll try for the Dragon company), but as I wanted a very muted color, I just gave the edges a bit of “Cavalry brown” mixed with white.

All in all a very pleasant experience, and I’m very much looking forward to trying variations of my new "red technique" on other miniatures.