Have you ever tried painting a figure That. Just. Wouldn’t. Cooperate?
Well I just did – two of them in fact: 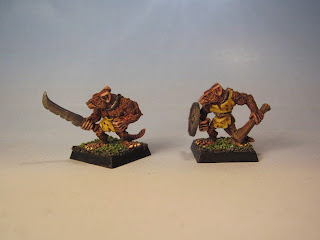 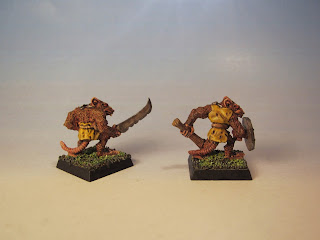 I’ll be the first to admit that the paint-job is decidedly below-average, but these are slaves and were never really meant to be ‘Eavy Metal standard.


I actually began painting these two at the same time as the dwarf bolt thrower from last week, intending to use them as a gap-filler for when the dwarfs were drying. However, I quickly got absorbed by the crew and didn’t really get started on the slaves until last Monday, except for messing about with the fur. And that’s where I first ran into trouble…

I gave them a medium brown base-coat and then inked them with my P3 brown ink. I’ve complained about this before, but that ink is basically a deep red – not brown. Now, I didn’t know this at the time (it was the first time I used it) but as a result I ended up with two “ginger” Skaven – not at all the effect I’d hoped for. I’ve tried to fix it, but I’m not really sure I can get the red sheen entirely off without stripping them and starting over from scratch.

Next came the hands, feet, ears and tail. My previous Skaven have mostly had light brown skin, but I’ve seen some really nice effects with a more pinkish color, so I figured I’d try that out. The finished results are… “mixed” would probably be a good word. I quite like the effect on the ears and hands, but I simply couldn’t find the right tone of pink for the tails, and they ended up rather muddy I’m afraid.

The last major hurdle was the tunics. Here I encountered an issue I’m sure all Skaven players have faced: How do you distinguish the different troop types from each other? To the untrained eye a slave looks much the same as a clanrat or a plague monk, and if you aren’t careful you end up with an unfocused brown mass. On the other hand, you probably don’t want them looking too bright and colorful.
As I’ve already painted my clanrats with green clothes, I decided to give my slaves yellow tunics. Higher orders (stormvermin, and characters) will then get blue clothes, and I’ll figure something out for the more specialized troops when I get to them. This color coding puts me dangerously close to bright-and-cheerful territory, but as muddy colors seem to be a specialty of mine, I’m fairly certain I can keep the whole thing appropriately muted.
The tunics worked out reasonably well, and after painting the metal and a bit of detailing, the slaves were, finally, done. Only took me two weeks.

Croaker
Posted by Croaker at 10:22