The wife and I are visiting her family this week, which means I won’t be doing any painting. I’m slightly bummed out but this turn of events – not because my in-laws are especially disagreeable people, but simply because I’m quite eager to get started on the Dragon Company troopers.

There is a silver lining through, as I now have the time, and lack of excuses, to get started on a project I’ve been putting off for a while; my first (but hopefully not last) Advanced Heroquest report.  That naturally requires playing a game of AHQ, which I actually did back in December. I just never got around to do a write-up of the first session (I told you I’d been putting this off) and as I still need to take a few pictures as illustration, I won’t be able to do it until I get back home.  What I can do, however, is introduce you to the party.

I used the traditional warrior/wizard/elf/dwarf quartet and decided to generate their stats randomly. I’m happy to report that they all survived their first expedition (though they haven’t finished the quest yet), and this is the way they  are before returning to town, which is why they are low on ammunition but, relatively, wealthy.
Remember that stats (for from wounds and fate) range from 1-12, but usually lie between 4 and 10 for starting characters. 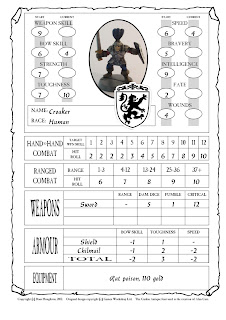 He’s got excellent Strength (S) and Toughness (T) (seven being the maximum for a starting human) and a very good Weapon Skill (WS) and Wound score (W). This combines to make him an excellent tank – the WS being especially useful as it means that most normal enemies have to roll 10 to even hit him.

I gave him the traditional sword, shield and chainmail, making him even more resilient but lowering his, already average, speed (SP) to a not-at-all-excellent four. As long as he doesn’t encounter some sort of trap he’ll be fine I guess.
His only real weakness is a pitiful Bravery (B), which will make things very interesting if I ever encounter a fearsome creature.

Next we have the dwarf – Allum Stonehammer: 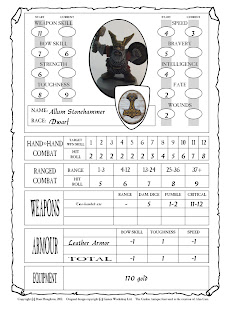 He’s a bit more of a mixed bag with an excellent WS of 11 and T of eight (both max for a starting dwarf), a decent S of six and decidedly unimpressive speed of four and bravery five. Yes, that does indeed mean that both my front line warriors are quite likely to curl up on the floor at the first sight of a troll!

Allum’s real weakness lies in his catastrophically (for a warrior) low W of two! (the lowest possible result). This makes it very dangerous for him to be in front, even though his high WS and T gives him some protection. Also, because monsters always attack the target with the lowest WS (using the solo rules), as long as he’s standing besides Croaker, the human will absorb most of the hits.
I figured that I might as well go all in, so I equipped him with a two-handed axe and leather armor. This makes him rather fragile, but he almost always hits, and he does decent damage. Just as long as no one hits him...

Third on the roster is the elf – Ellandiel 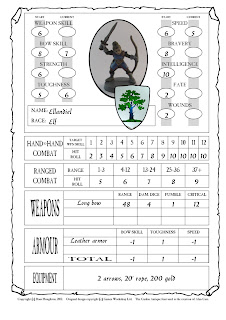 He’s… well, frankly he’s not all that great. Low WS, SP and W and average BS, S, T and B. His only really good stat, Intelligence (INT), isn’t even all that useful in a warrior.

I gave him a bow and leather armor and hoped that he’d make himself useful somehow.

Rounding things out is the wizard – Hans Müller: 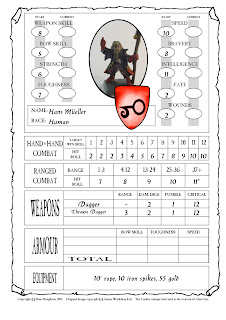 In a rare stroke of fortune, he’s got near perfect stats for a wizard. Low BS and S (but who cares) but good WS and B – and the maximum possible T, SP and INT! His only real weakness is a W of two (in fact, I got the lowest possible W for three out of the four character). All this combines to make him a very reliable, and surprisingly resilient, magic user.

I gave him a dagger (the only weapon he can use), some spell ingredients (all used up now) and some rope and iron spikes (useful for crossing chasms).

After rolling up the characters, I had to come up with a quest for them. I kept things very basic and decided on the following:


This should be a relatively simple quest, or so I hope… 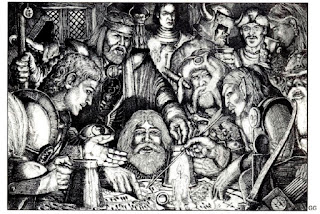